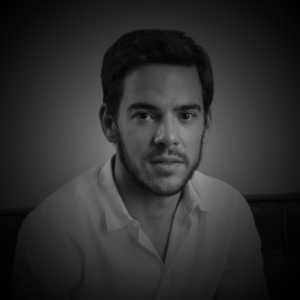 Antoine (38 years old) co-founded Adveris agency in Paris in 2009. The agency is the 6th most awarded digital agency in France. Adveris was among the 35 agencies nominated by Awwwards for the “Agency of the year” worldwide award in 2017.

Antoine is CEO and co-founder in charge of creation. He has a creative developer profile with both a strong background in interactive design and a deep understanding of tech issues. He recently worked on R&D projects merging AI, 3D/WebGL and sensors/environment awareness.

Antoine was a jury member of “Grand Prix Strategies du Marketing digital” in 2016. He wrote several articles regarding design, AI and technology for magazines such as Strategies and is co-author of the book “Développer votre entreprise grâce au web” (Dunod).

Previously, Antoine worked at Lazard (M&A) in Paris from 2006 to 2009 (on media/technology deals in particular.

Antoine Gastal  graduated from ESSEC business school in Paris in 2006. During his studies, he worked at Renault (digital marketing department, Paris) in 2003, at JPMorgan (M&A, London) in 2005 and created his first digital studio Abakoo in 2005.