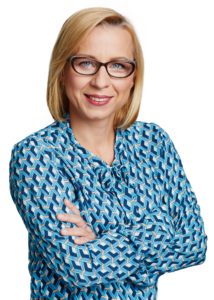 A manager with over 20 years of extensive expertise in the media and advertising industry. Specialist in marketing communication, media planning and client service managing. She began her career in 1995 in the StarcomMediaVest media house, where she was Managing Director since 2000. Later on, she continued to gain experience working in the London branch of StarcomMediaVest, Initiative Media agency, G+J publishing house and Interia. In 2009 she joined the Havas Media agency in the Havas Media Group, where she has been Managing Director since November 2013.

The Havas Media agency managed by her has been consistently ranked among the top media houses on the Polish market, and was also ranked 1st in the Vitality ranking, with the highest score and an A rating, as well as a High profile according to the latest Recma report, February 2020.

SAR member, juror in the Effie industry contest, as well as laureate of awards: Cannes Lions, Effie, InnovationAD, Mobile Trend, Media Trendy and Mixx Awards. Renata Wasiak-Sosnowska was recognized in 2017 and in 2018 in the “100 Women of Business” national ranking of the Puls Biznesu magazine and took 2nd place in the Ad wo/Man 2017 industry competition organized by the Press magazine. Havas Media agency managed by her received the ‘Success of the Year 2017’ title in the ‘Advertisement Panorama’ report by the Press magazine. It was also awarded the ‘Strategic Partner’ distinction in 2017 and the ‘High Efficiency’ distinction in 2018 in the annual ‘Advertising Agencies and Media Houses’ special report by the Media i Marketing Polska monthly. Moreover, the agency she manages has repeatedly won a number of prestigious awards such as Effie, Mixx Awards and Forbes Diamond. At the 20thAnniversary Jubilee of Effie Poland, Havas Media was recognized as one of the 20 most successful media agencies in Poland.