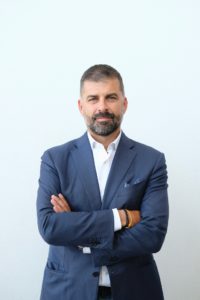 An Economics graduate, he began his career in 1995 in the marketing department at Nintendo France, then from 1996 to 2000 he was General Manager and CEO of Eureka, a commercial company of CIRM Market Research, and from 2001 until 2003 he was Commercial Director and General Manager of Centunesima of HDC Holding della Comunicazione. In 2004 he founded Acqua Group together with Andrea Cimenti and since 2019 he is Board Member of Young Digitals.. He holds the following institutional positions: Vice President of UNA (United Communication Companies), Board Member of Confindustria Intellect delegated by UNA, Board Member of Audipress, Member of the Marketing Commission of CNCC (National Council of Shopping Centres), Counselor of Agire (Italian Golf Real Estate Association). He speaks fluent English and French, and his interests include golf, football, Hebrew and travel.