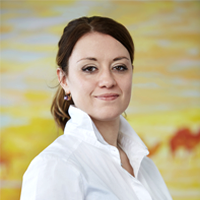 Raised in a cosmopolitan family and with dual citizenship, Camilla trained between Italy and Canada following a management-oriented path, which she completed in an American university with a double degree.

Born in 1982, with a great passion for communication and an extroverted and enterprising temperament, she soon tested herself in various roles and companies in the industry.

In 2006, she joined the family company group, and then became the chief executive of the Gruppo Roncaglia company that deals with big data.

A digital native vision, combined with a strong attention to market developments, make her overcome every barrier between atl, btl and digital and between different media. Today the main thing that she’s focused on is Creative Relationship Marketing, where creativity, data and innovation are put at the service of the relationship between brands and people. Without forgetting the passion for boxing, which she has been practicing consistently for about 10 years.