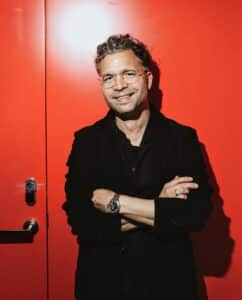 Based on a unique, agile sprint methodology his team collaborates with brands to use Google’s technologies and platforms in new ways: From Google Lens experiences for Nivea Men, over ML-based fashion experiments like Project Muze for Zalando and immersive broadcasting like Live VR for Red Bull Air Race, to BMW MINI’s WebGL-powered ‘Map of Big Love’.

He started his career in 2001 at Y&R, before joining Jung von Matt in 2006 – according to the Big One the ‘most-awarded creative agency across all media and the world’ in 2007. Later Achim founded his own strategy unit as Board Member at LLR – a Jung von Matt spin-off, that directly won 9 Lions at Cannes in their first year and became ‘Newcomer Agency 2009’ in Germany. In 2015 he arrived at Google.

Since his first of 10 EFFIE award wins in 2005 he advocates for effectiveness. In 2013 he served as a Board Member of the APG Germany. For years he judged the New York Festivals AME Awards. And since 2017 he is a regular Jury Member at the EFFIE Europe. In 2019 he was also appointed to EFFIE’s Steering Committee, providing guidance across all program areas. And in this year he also chaired the EFFIE Romania as Jury President.

If Achim is not working on new immersive experiences for brands, he loves to go for a run with his dog or to the yogurt ice cream shop on the other side of the street.