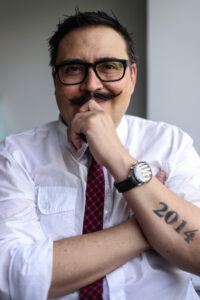 Carlos joins Freepik in August 2022 as Chief Marketing Officer, where he currently leads the global  Marketing and Comms efforts for all the Company’s brands, Freepik, Flaticon, Slidesgo, Videvo and Wepik.

Originally from Mexico, Carlos moved to Dublin, Ireland in 2018 to direct Twitter’s EMEA Business Marketing team, this after 4 years as Head of Brand Strategy for Twitter in Spanish Speaking LATAM.

Before joining the Tech industry, Carlos worked as a Creative Director in the Mexican advertising industry for more than fifteen years in agencies such as Lowe, Grey, Young & Rubicam and Cheil where he spent 4 years as their Executive Creative Director.  He started his career in traditional advertising but then became an integrated Creative Director, developing traditional, digital, experiential and shopper advertising. Working for brands such as Samsung, Danone, Ford, Land Rover, Coca-Cola, Greenpeace, Gatorade, Unilever and many others.

Among the recognitions that Carlos has obtained in his career are awards in the most important advertising festivals including Cannes Lions, The Effie, London and New York Festivals.

Carlos is an advocate for the Latinx community in the Tech Industry and a firm believer in the importance of diversity as an enabler for creativity and innovation.