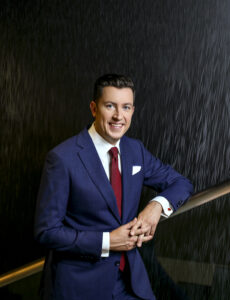 After completing both a degree in Marketing & Business Law at Strathclyde University in Glasgow and a DipM from the Chartered Institute of Marketing, Grant started his career at MARS Inc. He joined the snack-food unit in the UK as management trainee in 1997 and worked in UK and abroad in various local and international Marketing positions of increasing seniority.

8 years later, in 2005, he joined the brewer SABMiller in Budapest as Marketing Manager in the Europe Hub for 18 months. This was followed by Marketing Director roles leading the local units in Spain (2yrs), Romania (3yrs), and the flagship European business in Czech & Slovakia (6 years).

In 2018 after ASAHI acquired the SABMiller European units, he was promoted to Head the Marketing function in ASAHI CEE. In 2020 became CMO (Chief Marketing Officer) for ASAHI Europe & International, a business that spans the globe excluding Japan and Australia and includes approx. 180 Marketers. The role is responsible for the development of all key global brands – Peroni Nastro Azzurro, Asahi SuperDry, Pilsner Urquell, Kozel and Grolsch.